For more than 25 years, Jack Bybee's unique technologies have been making my audio systems, and therefore my music listening, far more natural-sounding and emotionally satisfying. As an audio reviewer, my equipment has undergone many changes. But time after time, regardless of the specific gear being used, the addition of Bybee products has always resulted in the enhancement of the listening experience in ways that no other audio product has been able to accomplish.

For all of these years Jack Bybee's Quantum Purification technology, implemented in AC circuits and signal paths, has helped my systems to become the best they can be. Now in the last couple of years, Jack has developed a totally new technology with his Crystal Series. I have heard stunning results from the combination of Bybee Crystal and Quantum Purification technologies. For example, the marvelous Bybee Speaker Bullets, which I have been using for years, were dramatically enhanced by the addition of Crystal Series technology to the original design. In my core system electronics, both my Wells Audio-modified Jolida Fusion tubed preamplifier (which far outperforms my previous $25,000 VTL 750 – and my Wells Audio Innamorata Signature solid-state power amplifiers incorporate both of those Bybee technologies, as well as his active noise reduction Music Rails. One net effect is that these are the quietest electronic components I have ever encountered.

I have always believed that the listening room is the most important component of any audio system, and over the years I have reviewed and adopted a number of products to "naturalize" my listening experience, moving away from a system sounding "audiophile" but not particularly like live music, toward re-creating the feeling of a live musical performance. (I attend roughly 80 live classical music performances per year, encompassing the Chicago Symphony Orchestra, solo piano and chamber music, and Opera.) Before Jack Bybee sent me a set of Room Neutralizers, my listening space was already enhanced by, in succession, Shakti Hallographas, Synergistic Research Acoustic ART, Steinmusic Harmonizers & Stein Blue Suns, and IPC Room Equalizers. Each of those systems is quite powerful, and in successive reviews I had tested each both without and including the previous systems. To my surprise, and ultimately to my satisfaction, all of them work symbiotically together, with each addition improving the overall acoustic of my listening space. When I received the Room Neutralizers, I decided to add them without going through the tedious task of removing the other acoustic treatments.

The starting recommendation for placing the 8 Room Neutralizers is to place 2 on the wall behind the speakers, 2 on each sidewall, and 2 near the room corners opposite to the speaker wall. My listening room is somewhat unconventional:

Ceiling is 9 feet. Length is 26 feet from the outside wall to the opposite wall. The sidewalls in the half of the room where the speakers sit are 15 feet apart. Those sidewalls extend 16 feet; a large dining room opens on the left side, and a large foyer and hallway open to the right. That means the system loads into a voluminous extended space. The solid oak floor laid over a foot of concrete solidifies bass response. Two huge (30 sq. ft. each) windows on the outside wall behind the speakers do cause some loss of bass output, but also help to avoid room mode peaks. The planar/ribbon dipole Analysis loudspeakers are toed in 5 degrees, 5 feet out from the back wall with inside edges 8 feet apart. My main listening couch is 13 feet from the plane of the speakers.

Initially, I placed 2 Neutralizers in the back corners behind the speakers; 2 Neutralizers on each sidewall; and 2 on the opposite wall (remember, no rear corners) in line with the Neutralizers located behind the speakers. This basic placement brought the system alive to a greater extent than I had previously heard. The soundstage became wider and deeper, imaging of individual instruments was more precise – virtually holographic, actually – and both deeper low frequencies and more open and extended highs (especially the violin section) were evident.

But I was not done. Previously, with the Magic Stones that are part of the Steinmusic Harmonizers, I had gotten improved results from putting a couple of them on the ceiling. Remembering that, I removed the 2 Neutralizers nearest to the speakers from the sidewalls and attached them to the ceiling, with one halfway between the speakers and the listening couch and the other about 4 feet closer to the listening couch. This step yielded even more astonishing results. On a number of really superb LPs and high-resolution DSD downloads, I was now hearing the most dimensional, yet precisely focused sound ever, with each recording properly scaled, from a huge orchestral and choral event to a solo voice and piano, and even a solo guitar.

Jack Bybee has done it again! These small devices are unquestionably the most musically satisfying environmental enhancement I have ever experienced. Any music lover who wants the best audio attainable needs to listen to the Bybee Room Neutralizers. 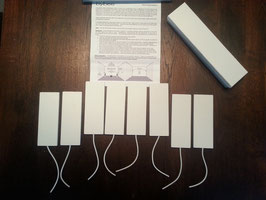